There's a lot of exciting stuff happening in the Python web development ecosystem right now — one of the main drivers of this endeavour is ASGI, the Asynchronous Server Gateway Interface.

I already mentioned ASGI several times here, in particular when announcing Bocadillo and tartiflette-starlette, but I never really took the time to write a thorough introduction about it. Well, here we are!

Before we begin, I'd like to announce that I recently created awesome-asgi, an awesome list to help folks keep track of the ever-expanding ASGI ecosystem. 🙌 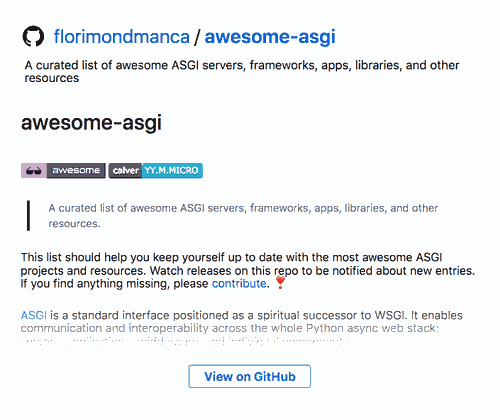 You can watch releases to be notified of new entries to the list. 👀

It all started with async/await

Contrary to JavaScript or Go, Python is not a language that had asynchronous execution baked in from the start. For a long time, executing things concurrently in Python could only be achieved using multithreading or multiprocessing, or resorting to specialized networking libraries such as eventlet, gevent, or Twisted. (Back in 2008, Twisted already had APIs for asynchronous coroutines, e.g. in the form of inlineCallbacks and deferredGenerator.)

But this all changed in Python 3.4+. Python 3.4 added asyncio to the standard library, adding support for cooperative multitasking on top of generators and the yield from syntax.

Later, the async/await syntax was added in Python 3.5. Thanks to this, we now had native coroutines independent of the underlying implementation, which opened the gold rush towards Python concurrency.

And what a rush it was, indeed! Since 3.5 was released, the community has been literally async-ifying all the things. If you're curious, a lot of the resulting projects are now listed in aio-libs and awesome-asyncio.

Well, you guessed it — this also means that Python web servers and apps are moving towards async. In fact, all the cool kids are doing it! (Even Django.)

An overview of ASGI

Now, how does ASGI fit in all of this?

From a 1000-foot perspective, ASGI can be thought of as the glue that allows Python asynchronous servers and applications to communicate with each other. It shares a lot of design ideas with WSGI, and is often presented as its spiritual successor with async built-in.

Here's what this mental model looks like in a diagram:

At a very high-level, ASGI is a communication interface between apps and servers.

But in reality, it's a bit more complex than that.

To find out how ASGI really works, let's take a look at the ASGI specification:

So according to the spec, what ASGI really specifies is a message format and how those messages should be exchanged between the application and the protocol server that runs it.

We can now revise our diagram into a more detailed version:

There are many more interesting details to look at, obviously. For example, you can take a look at the HTTP and WebSocket specification.

Besides, although the spec focuses a lot on server-to-application communication, ASGI turns out to encompass much more than that.

We'll get to this in a minute, but first…

Now that we've seen how ASGI fits in the Python web ecosystem, let's take a closer look at what it looks like in code.

ASGI relies on the following mental model: when the client connects to the server, we instanciate an application. We then feed incoming bytes into the app and send back whatever bytes come out.

"Feed into the app" here really means call the app as if it were a function, i.e. something that takes some input, and returns an output.

And in fact, that's all an ASGI app is — a callable. The shape of this callable is, again, defined by the ASGI spec. Here's what it looks like:

The signature of this function is what the "I" in ASGI stands for: an interface which the application must implement for the server to be able to call it.

Let's take a look at the 3 arguments:

In essence, these arguments allow you to receive() and send() data over a communication channel maintained by the protocol server, as well as know in what context (or scope) this channel was created.

I don't know about you, but the overall look and shape of this interface fits my brain really well. Anyway, time for code samples.

Show me the code!

To get a more practical feel of what ASGI looks like, I created a minimal project which showcases a raw ASGI HTTP app served by uvicorn (a popular ASGI server): 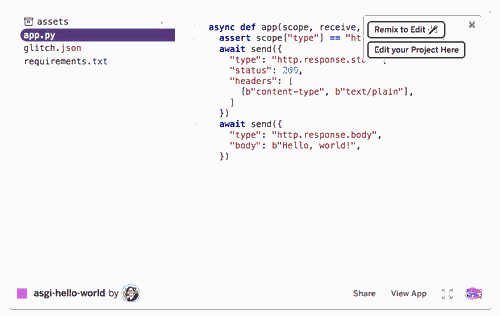 Here, we use send() to send an HTTP response to the client: we send headers first, and then the response body.

Now, with all these dictionaries and raw binary data, I'll admit that bare-metal ASGI isn't very convenient to work with.

Luckily, there are higher-level options — and that's when I get to talk about Starlette.

Starlette is truly a fantastic project, and IMO a foundational piece of the ASGI ecosystem.

In a nutshell, it provides a toolbox of higher-level components such as requests and responses that you can use to abstract away some of the details of ASGI. Here, take a look at this Starlette "Hello, World!" app:

Starlette does have everything you'd expect from an actual web framework — routing, middleware, etc. But I decided to show this stripped-down version to hint you at the real power of ASGI, which is…

Turtles all the way down

The interesting and downright game-changing bit about ASGI is the concept of "Turtles all the way down". (This expression was coined originally (I think?) by Andrew Godwin, the person behind Django migrations, the Django async revamp, and a fair bit of the ASGI story.) But what does it mean, exactly?

Well, because ASGI is an abstraction which allows telling the context we are in, and to receive and send data at any time, there's this idea that ASGI can be used not only between servers and apps, but really at any point in the stack.

For example, the Starlette Response object is an ASGI application itself. In fact, we can strip down the Starlette example app from earlier to just this:

How ridiculous is that?! 😍

The deeper consequence of "Turtles all the way down" is that we can build all sorts of applications, middleware, libraries and other projects, and ensure that they will be interoperable as long as they all implement the ASGI application interface.

(Besides, from my own experience building Bocadillo, embracing the ASGI interface very often (if not always) results in much cleaner code.)

For example, we can build a ASGI middleware (i.e. an app that wraps another app) to display the time a request took to be served:

To use it, we wrap it around an app…

…and it will magically just work.

The amazing bit about this is that TimingMiddleware can wrap any ASGI app. The inner app here is very basic, but it could be a full-blown, real-life project (think hundreds of API and WebSocket endpoints) — it doesn't matter, as long as it's ASGI-compatible.

(There's a more production-ready version of such a timing middleware: timing-asgi.)

Why should I care?

While I think interoperability is a strong selling point, there are many more advantages to using ASGI-based components for building Python web apps.

In terms of libraries and tooling, I don't think we can say we're there just yet. But thanks to a very active community, I have strong hopes that the ASGI ecosystem reaches feature parity with the traditional sync/WSGI ecosystem real soon.

Where can I find ASGI-compatible components?

In fact, more and more people are building and improving projects built around ASGI. This includes servers and web frameworks obviously, but also middleware and product-oriented applications such as Datasette.

Some of the non-web framework components that I got the most excited about are:

While seeing the ecosystem flourish is great, I've personally been having a hard time keeping up with everything.

That's why, as announced at the beginning of this article I created awesome-asgi. My hope is that it helps everyone keep up with all the awesome things that are happening in the ASGI space. (And seeing that it almost reached 100 stars in a few days, I have a feeling there was indeed a need to colocalize ASGI resources.)

While it might look like an implementation detail, I truly think that ASGI has laid down the foundations for a new era in Python web development.

If you want to learn more about ASGI, take a look at the various publications (articles and talks) listed in awesome-asgi. To get your hands dirty, try out any of the following projects:

These projects were built and are maintained by Encode, which mostly means Tom Christie. There are open discussions on setting up an Encode maintenance team, so if you were looking for an opportunity to help advance an open source niche, there you go!