I've worked on a couple of web projects in the past year or so. I now feel at ease and productive with a few select technologies. In the realm of frontend development, that means Angular. And to be honest, it feels great.

Yet, I find that I've begun resting on my laurels, and boredom even began to take the upper hand. As a result, I started learning Vue.

In this short post, I'll expose my state of mind, the difficulties I am currently encountering and what I do to cope with them in the process of learning Vue after a year of working with Angular.

How did we get there?

I've worked with Angular quite extensively lately. Angular is the first modern web framework I've learnt, and I've built at least three or four different apps of various sizes. I also learnt a ton about modern concepts such as Progressive Web Apps and Server Side Rendering along the way.

But there's a catch. Every time I am given the opportunity to choose a frontend framework for a new project, I go for Angular. Why? Simply put, because it's the only one I know and I feel comfortable with.

Yet, immediately after taking the decision, a little voice sneaks into my head, and it whispers: "Angular, again? Meh…".

Don't get me wrong — it does feel rewarding to have become knowledgeable enough at a technology that I can build a whole system without barely looking at the documentation. I feel proud.

There's also no need per se to be knowledgeable at every frontend framework out there — there are way too many of them, plus specialising also has its advantages.

But for me, there's a problem:

You see, I do love learning new things. I don't particularly enjoy feeling like a beginner — that's rather uncomfortable — but I always dig the outcome: I can do things I couldn't do before, and it's thrilling.

That's what motivated me to try something else. Also, some circumstances have helped.

I boarded on a major school project a few weeks ago. We had the possibility to choose between Angular and Vue.

I didn't know much about Vue — only a few things I've read here and there, and perhaps a toy project from a year ago. Going for Angular would have been so much easier because I've built up a lot of experience and know-how.

But guess what? We went for Vue.

Sometimes, leaving your comfort zone is as simple as asking: "why not?".

It won't be easy

I dived in just today, and let me tell you — I'm excited, but it feels very uncomfortable right now.

Actually, I feel frustrated. I have to re-learn everything. Why does it all look so similar, yet so different? I felt like I was a master, but I am now a total n00b. Duh.

So, in this new and unknown ecosystem, I need a survival strategy not to drown under the seemingly huge amount of new things to learn.

Build on what you know

Luckily, I now have a better understanding of the world of frontend development than I had when I first tried Vue. A lot of stuff is already out of my way, and I can focus on the framework and its ecosystem. (Also, Vue has matured a lot, which is very good news.)

Quite naturally, I am looking for what is familiar. I have already noticed that:

At least, this is not a cold start. There are indeed a lot of aspects I can relate to and compare. Phew!

Me generating a project using Vue CLI: "TypeScript! There you are!"

Yet, I couldn't help but notice big differences:

All of these differences gave me the general intuition that Vue imposes much less on the developer.

As someone with an Angular background, I find this a a bit daunting.

Angular's conventions and ways of doing felt secure. They also facilitated working with other devs — because we all shared the same practices. How is it going to be with Vue? Does everyone have a different workflow?

So what am I left with? Some stuff looks familiar, other stuff looks better (single-file components look quite slick after all), but there's also some stuff that I miss. And so I am looking for replacements.

The issue of routing has also been solved — there's no built-in Router in Vue, but vue-router is a standard plugin that's even suggested when creating a new project via Vue CLI.

Now, what about state management? Angular has services and I've been lucky enough that, when data binding becomes insufficient, I could use services to store some shared state.

Vue has no such concept of services, so what's left? A popular option seems to be vuex, a Flux-inspired state management Vue plugin. I heard about state management before (although mostly through Redux — see Understanding Redux), so I'm interested to dig deeper and see how that turns out. I just hope it won't be too much of a burden. 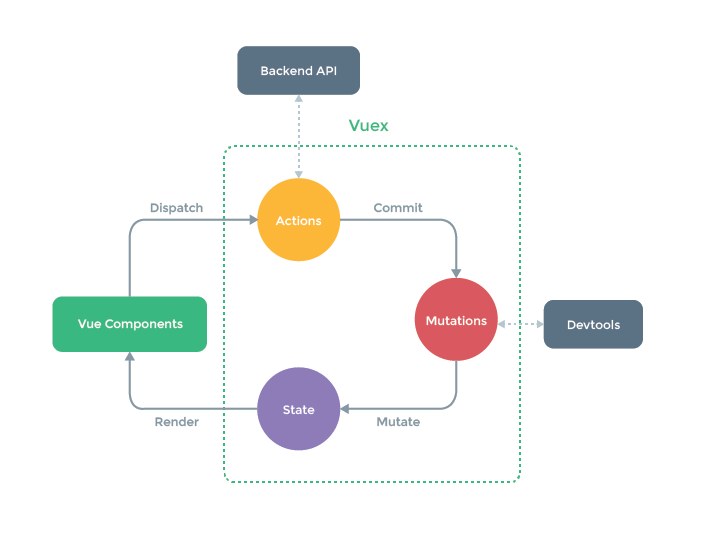 The Vuex state management pattern. Looks sensible, but I hope it won't be too heavy. (Source: Vuex docs.)

Lastly — RxJS and event streaming. That's probably the thing I like the most in Angular. Observables make working with streams of events so pleasant and maintainable.

Well, I haven't found a substitute for that yet. My guess is — there won't be one. Actually, I suppose Vue won't get in my way and I could use RxJS, but there seems to be many built-in features already to ensure reactivity — which I also find quite exciting. We'll see!

I used to feel very knowledgeable about Angular, yet Vue has got me back to the position of a beginner. It's not easy, and sure as hell feels uncomfortable.

But — and this is a message to all striving beginners out there — experience also tells me that the journey will be worth it.

At the end of the day, you'll have learnt yet another technology, and be able to do things you couldn't do before. It may take weeks or months, but it will happen, and you'll feel proud. 💪

As for me, I'm not giving up on Angular just yet, but I'm excited to learn more about Vue. I will focus on building a mental model of how everything fits together in Vue. I look forward to the day when it all just "clicks" — because there's nothing more exhilarating than pushing your boundaries to learn something new. 💻

Have you already been in this position? How have you coped with having to re-learn everything? I'd be happy to hear your thoughts!