This post is an adaptation of the official Bocadillo tutorial.

Hi everyone! Today's post is going to be a little special. Some of you may remember this post I wrote some months back: How I Built A Python Web Framework And Became An Open Source Maintainer.

Since then, I kept working on Bocadillo, and it's been a great time! In fact, I learnt just last week that I will be flying to Munich at the end of May to give a talk at PyConWeb 2019! This will be my first conference and talk ever, so needless to say that I'm SUPER EXCITED! 🙌🤩

Another great news is that Bocadillo v0.13 has just been released: 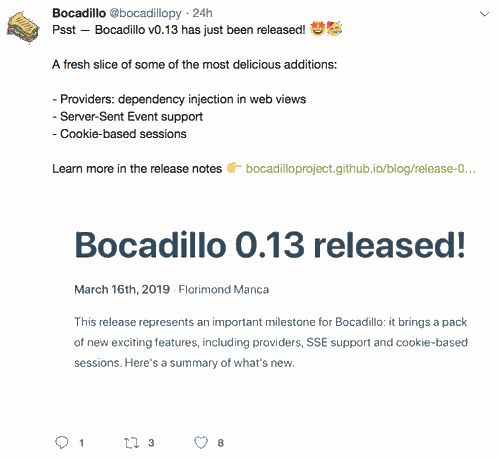 With all these good vibes in the air, I finally decided to go ahead and publish a thorough tutorial.

Without further ado, here's the plot: we're going to try and build a chatbot server!

Bocadillo has many features built-in, so this is a great opportunity to go through some aspects of building web services with Bocadillo.

In this tutorial, you'll get to play with chatbots but also learn how to:

Still wondering how we'll build something seemingly as complex as a chatbot? Well, you probably know that Python has a gigantic data science ecosystem. I would've bet actual money there would be a chatbot framework somewhere out there.

Turns out — there was! After some research, I stumbled upon ChatterBot. It looks pretty solid and popular, so we'll use it to build Diego, a friendly conversational agent. Don't worry, this won't require any background in data science nor chatbot technology!

Setting up the project

We should now have the following directory structure:

If you've ever worked with Flask or, well, nearly any Python web framework really, this should look oddly familiar. Nearly boring. Who cares? It works! Check for yourself:

If you go to http://localhost:8000 and get a 404 Not Found response, you're all good! Enter Ctrl+C in your terminal to stop the server.

We're now ready to get to the meat of it! The first thing we'll build is the WebSocket endpoint.

If you're not familiar with WebSocket, don't worry — here's a 10-word summary: it allows a server and a client to exchange messages in a bidirectional way. It's good old sockets reinvented for the web.

Due to their bidirectional nature, they're very suitable for the kind of application we're building here — some sort of conversation between a client and a server (i.e. our chatbot).

If you're interested in learning more about WebSockets in Python, I strongly recommend this talk: A beginner's guide to WebSockets.

Alright, so we won't plug the chatbot in yet. Instead, let's make the server send back any message it receives — a behavior also known as an "echo" endpoint.

Add the following between the app object declaration and the app.run() block in app.py:

A few minimal explanations here, for the curious:

Trying out the WebSocket endpoint

How about we try this out by creating a WebSocket client? Fear not — we won't need to write any JavaScript. We'll stick to Python and use the websockets library, which comes installed with Bocadillo.

Create a client.py file and paste the following code there. What it does is connect to the WebSocket endpoint and run a simple REPL:

Run the server-side application with python app.py and, in a separate terminal, start the client.py script. You should be greeted with a > prompt. If so, start chatting!

Type Ctrl+C to exit the session and close the WebSocket connection.

Now that we're able to make the server and a client communicate, how about we replace the echo implementation with an actual, intelligent and friendly chatbot?

This is where ChatterBot comes in! We'll create a chatbot rightfully named Diego — a chatbot speaking the asynchronous salsa. 🕺

Go ahead and create a chatbot.py file, and add Diego in there:

(ChatterBot's chatbots are quite dumb out of the box, so the code above trains Diego on an English corpus to make him a bit smarter.)

At this point, you can try out the chatbot in a Python interpreter:

Let's now plug Diego into the WebSocket endpoint: each time we receive a new message, we'll give it to Diego and send his response back.

If you run the server/client setup from earlier, you can now see that Diego converses with us over the WebSocket!

Refactoring the chatbot as a provider

Clients are now able to chat with Diego over a WebSocket connection. That's great!

However, there are a few non-functional issues with our current setup:

If you think about it, Diego is a resource — ideally, it should only be made available to the WebSocket endpoint at the time of processing a connection request.

So, there must be a better way… and there is: providers. ✨

Providers are a unique feature of Bocadillo. They were inspired by pytest fixtures and offer an elegant, modular and flexible way to manage and inject resources into web views.

Let's use them to fix the code, shall we?

The code above declares a diego provider which we can now inject into the WebSocket view. All we have to do is declare it as a parameter to the view.

Let's do just that by updating the app.py script. Here, you get it in full:

No imports required — Diego will automagically get injected in the WebSocket view when processing the WebSocket connection request. ✨

Alright, ready to try things out?

There you go! Beautiful, modular and flexible dependency injection with Bocadillo providers.

Let's go one step further. True, we have quite elegantly implemented conversation with a chatbot over WebSocket. Now, how about we keep track of how many clients are currently talking to the chatbot?

If you were wondering — yes, we can implement this with providers too!

That's it! While the client is chatting with Diego, it will be present in the set of clients.

How about we do something with this information?

As a final feature, let's step aside from WebSocket for a moment and go back to the good old HTTP protocol. We'll create a simple REST endpoint to view the number of currently connected clients.

Go back to app.py and add the following code:

Again, if you've ever worked with Flask or Falcon, this code shouldn't come as a surprise. All we do here is send the number of clients (obtained from the clients provider) in a JSON response.

Go ahead! Run python app.py and run a few python client.py instances. Check out how many clients are connected by opening http://localhost:8000/client-count in a web browser. Press Ctrl+C for one of the clients, and see the client count go down!

Did it work? Congrats! ✨

We're mostly done in terms of the features we wanted to cover together. I've got some ideas you can explore as exercises, of course, but before getting to that let's write some tests.

One of Bocadillo's design principles is to make it easy to write high-quality applications. As such, Bocadillo has all the tools built-in to write tests for this chatbot server.

You can write those with your favorite test framework. We'll choose pytest for the purpose of this tutorial. Let's install it first:

Now, let's setup our testing environment. We'll write a pytest fixture that sets up a test client. The test client exposes a Requests-like API as well as helpers to test WebSocket endpoints. Besides, we don't actually need to test the chatbot here, so we'll override the diego provider with an "echo" mock — this will have the nice side effect of greatly speeding up the tests.

So, go ahead and create a conftest.py script, and place the following in there:

Now is the time to write some tests! Create a test_app.py file at the project root directory:

First, let's test that we can connect to the WebSocket endpoint, and that we get a response from Diego if we send a message:

Now, let's test the incrementation of the client counter when clients connect to the WebSocket endpoint:

And, well, guess what?

If you've made it so far — congratulations! You've just built a chatbot server powered by WebSocket, ChatterBot and Bocadillo.

In this article, we've seen how to:

The complete code for this tutorial is available on the Bocadillo repo on GitHub: get the code! All in all, the server and providerconf.py only add up to about 60 lines of code — pretty good bang for the buck!

Obviously, we've only scratched the surface of what you can do with Bocadillo. The goal of this tutorial was to take you through the steps of building a Minimum Meaningful Application.

You can iterate upon this chatbot server we've built together very easily. I'd be interested to see what you come up with!

Want to challenge yourself? Here are a few ideas:

I hope you enjoyed this tutorial! If you'd like to support the project, be sure to star the repo. If you don't want to miss on new releases and announcements, feel free to follow @bocadillopy on Twitter!